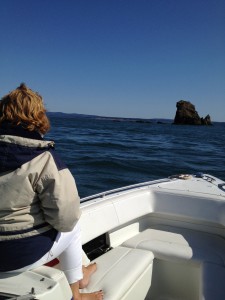 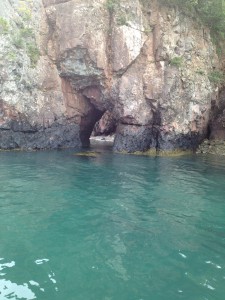 One of our favorite places to go boating is the Bay of Fundy. Launching from the ramp at Spencer’s Island, we can venture across the Bay to Cape Split, Blomidon Provincial Park, and Hall’s Harbour. Going east, we travel to Port Greville and Parrsboro. Leaving Spencer’s Island going west, we come to Cape D’or, Advocate and then out to Isle Haute.

The thing about boating here is that everything changes with each tide. The Bay of Fundy has the highest tide ranges in the world, and when tide is changing, the currents are amazing. It is the only place that I know of where you can boat “uphill”. The tides cannot get out (or in) fast enough between the rocks and this results in a buildup of water in certain places like Black Rock and Cape Split. At maximum tide change, going against the current the boat is actually going up a hill of water. Six hours later the same phenomenon happens again….only in the other direction. It is amazing to experience.

Going east from Spencer’s Island we come to Port Greville and all of its ship building history. A tight port only accessible at higher tides, one can explore right up the Ship Building Museum with a little luck. In your imagination you can see the ships being built all along this “down shore” coastline as they were a couple of hundred years ago.

Parrsboro is another ship building and industrial port accessible at high tide. Parrsboro shipping was once greater than that of Halifax, but is mostly fishermen and pleasure boaters there now. At one time, loads of lumber and manufactured goods were shipped from Parrsboro to ports all over the world. Business in New England was very lucrative for the Parrsboro shippers and producers. Lumber, coal and hay were mainstays for the port and the economy of the area.

Going east, near Cape D’or there is a hole through a rock where the boat will just barely pass though…with inches to spare….and I mean inches. In the same area, there are square holes high in the solid vertical rock wall where copper miners tunneled right through in order to make air shafts a hundred years ago.

Going around Cape D’Or is always exciting as the conflicting currents generate a lot of confused waves which seem to go in every direction. There is a lighthouse and a fog horn right on the corner of the Cape to let you know where you are.

Advocate has always had a full complement of hearty fishermen who brave the erratic tide and weather combinations in order to bring in the tastiest ground fish, shellfish and lobster. This little harbour is full of boats and is busy all of the time. Advocate has one of the most fascinating beaches that I know of. The beach is made up of small round stones and it attracts ocean debris like a magnet. You never know what you will encounter on this long, long beach.

Ten or fifteen minutes off of Advocate to Isle Haute and we find the pristine island called Isle Haute. It is the same as it was 10,000 years ago when the aboriginals held their ceremonial events there. Hundreds of seals will tag along beside the boat and the squawking of sea gulls in in the giant amphitheater is also an unforgettable experience which we never tire of. There are several endangered species residing on the island and a very interesting history including the purported visit in 1398 by Henry Sinclair.

Cruising around Cape Chignecto brings us to another interesting shore line with hundred of rocks and inlets to explore. High cliffs everywhere and lots of sea life and sea birds keep us company.

Boating in the Bay of Fundy can be very challenging due to the enormous tides. One must be aware of everything going on around you, and that the tides rise and fall very quickly. One can actually watch the water receding from the beach when it is going out, and many a boater has been left high and dry because they just parked the boat “for a second” to fetch an abandoned buoy on the beach etc.

Launching from Spencer’s Island launch ramp is possible at half tide or better, and plans must be made around the tide schedule. But is worth it.

There are several wonderful overnight facilities along the shore, and visitors will receive a warm welcome everywhere.

There are several time lapse videos showing the Bay of Fundy highest tides in the world. One can be found at 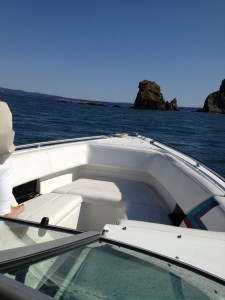